Primal Screen is a show about movies, from the ones on the big screen to the ones you stream.

I’ve been listening to RRR since I moved to Melbourne in 2012 and it’s still the soundtrack of my house. Coincidentally, my cat Dave is also a long-time subscriber and has even scored a few prize giveaways over the years, which I have very kindly taken off his paws.

My first on-air experience happened when my dear friend and fellow film academic Dr. Stuart Richards asked me to fill-in on Plato’s Cave. Fortunately for me (and unfortunately for the Plato’s Cave team), the winter of 2018 was a particularly bad one and I became something of a regular ring-in. In fact, I have never left.

Triple R is like a second family to me (but not in that gross way that evil corporations exploit their workers) – more like my actual family: loud, challenging, chaotic, insightful, and with lots of good music, interesting films, and long talks about absolutely everything and anything.

It’s been an absolute joy joining the Plato’s Cave team (and not just because I get to tell listeners all about my Larry David-like film viewing experiences – although that is a wonderful perk). RRR for me is Melbourne with all its complexities and contradictions: it’s a wonderful mix of genres, textures, ideas, and opinions.

Sneaking onto the Melbourne International Film Festival’s red carpet on Opening Night with the rest of the Plato’s Cave team and having an entire wall of press photographers wonder who we were, haha.

Not surprisingly, my happy place is the cinema: sat in the darkness, with a choc top dipped into a box of popcorn (try it – it’s a real game-changer), and waiting for those velvet curtains to pull open. This obsession of mine has left me with very pale skin and a tendency to link every conversation back to film, but I don’t regret a minute of it.

The cinema door has accidentally jammed shut with you stuck inside. If there was only one film in there, what would you want it to be, and why?

This is an obnoxious response (I mean, I am a film nerd after all): it would be Christian Marclay’s The Clock which is technically an art installation but it’s also a 24-hour long supercut of a century of cinema that perfectly matches the temporal space of every film scene to real-life time. Plus, I’ve never seen the whole thing!

Primal Screen is a show about movies, from the ones on the big screen to the ones you stream. 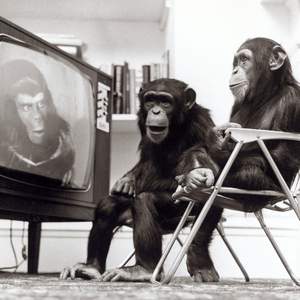 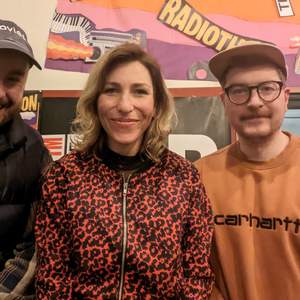