Food for thought: recipes, hints and tips, interviews and a market report.

My first experience with the mighty R's was listening to it in its first incarnation: 3RMT.

The first time I tried to listen to it was disappointing as living in Beaumaris in the South Eastern suburbs was a long way away from the small footprint that the station had at the time. This was a long time before any transmitter radiothons had been contemplated. Undeterred I found that if I got up on the roof of the house with a pretty bulky Fm radio I could finally listen to this very different station. It wasn't very comfortable and my mum thought I was crazy but it was so worth it.

The first incarnation of EAT IT! Started in 1987 as a half hour show on Sunday at noon with Martin Fripp Producing and Matthew Nevett as co-host.

Interviewing Sam Twining of the colonial tea empire and seeing his face when I told him that I preferred Jacksons Earl Grey was pretty good (I think he was a bit horrified to be doing an interview in a warehouse).

Getting a guy called Andrew Dowd to make us Mai Tais on air seemed like a good idea at the time and wow did they taste good! Unfortunately after about the third one which we had outside the on air studio we got just a little bit rowdy. An impromptu game of hall soccer with a scrunched up piece of paper as the ball got a bit noisy and boisterous and I remember the girl who was trying to do her Sunday arts show had to come out and tell us to shut the **** up as she was trying to do a radio show. I think I might have called her a cheddar head. Our relationship was a bit strained after that.

This may be clichéd. Actually it definitely is clichéd but Stephen Walker has been the doorway to so much music and philosophy through the years.

Free speech and the flowing of ideas unencumbered by commercial interests.

I've been pondering this one for a while now...

The Pixies Doolittle, it was a revelation then and still sounds great.

A bloody good Mary. (Antidote and poison in the same glass) and a club sandwich: they aren't that hard to make at home and making it takes the mind off the pain.

Food for thought: recipes, hints and tips, interviews and a market report. 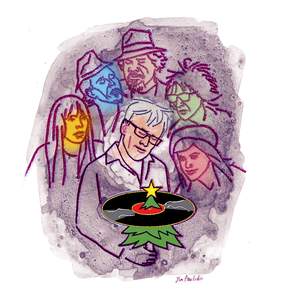