There is a crack in everything, that's where the light gets in. Subscribe to GtA podcast.

A show about the future, and how to avoid it.

Coming from a country town which had two interchangably mediocre AM stations and one local ABC radio with lots of cattle price reports, Triple R was a real inroad into lots of new culture. I remember the Skull Cave as especially creepy cool.

Greening the Apocalypse circa 2015

No one in the studio including myself noticed at the the time, but I was on The Grapevine once and I referred to Captain Cook's ship as the Enterprise instead of the Endeavour.

Breaking and Entering, because it's made my afternoon atmospherically richer many times now.

The studio door has accidentally jammed shut with you stuck inside. If there was only one record in there with you what would you want it to be and why?

Sure, it might be kind of humiliating, but I think I would take advantage of that fairly high powered communication device and make a plea for help. In which case I'd just need a good compilation record to pass off as programmed radio until the fire brigade or Dave or whoever arrived... maybe Ghostly Swim by Ghostly International artists.

There is a crack in everything, that's where the light gets in. Subscribe to GtA podcast. 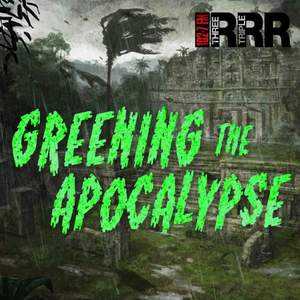 A show about the future, and how to avoid it.